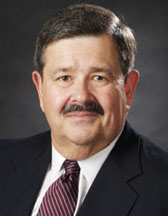 *Retired and inactive with the State Bar of Texas

Richard Thomas was born and raised in Navasota, Texas and is a founding partner of Thomas, Feldman & Wilshusen, LLP. Mr. Thomas served as a partner from the firm's inception in 1990 until December 31, 2013 when he became Of Counsel and later Senior Counsel to the firm until December 31, 2016. Mr. Thomas is currently retired and is on Inactive status with the State Bar of Texas. While partner of the firm, he handled all types of issues and disputes involving construction projects. He was a Fellow of the American College of Construction Lawyers, the membership of which is approximately 190 lawyers nationwide (including a few from Canada, Great Britain, and Australia) and is by invitation only. Mr. Thomas also served the legal profession by holding leadership positions in the American Bar Association's Forum on the Construction Industry (former Chair of Specialty Contractors and Suppliers Division), the Construction Law Section of the of the State Bar of Texas (former member of Governing Council), Dallas Bar Association Construction Law Section (former Member of Governing Committee), and Attorneys Council of the national American Subcontractors Association (former Chair). Mr. Thomas was designated as a Super Lawyer in the area of construction litigation from 2013 to 2016. He served the subcontracting industry as general counsel for the American Subcontractors Association's Texas and North Texas Chapters, and as general counsel for the Texas Construction Association, a legislatively active Texas statewide association on proposed legislation affecting the construction industry. He frequently testified as a resource witness for pending construction industry legislation before various committees of the Texas Legislature. While he was not a lobbyist, he is a primary author of eight Texas statutes affecting the construction industry, and a contributing author of several more. Mr. Thomas also filed numerous Amicus Curiae (Friend of the Court) Briefs in cases involving construction law and subcontractor issues. He was a frequent speaker and author of legal articles concerning construction industry legal subjects.

EMAIL US FOR A RESPONSE

How Can We Help You?